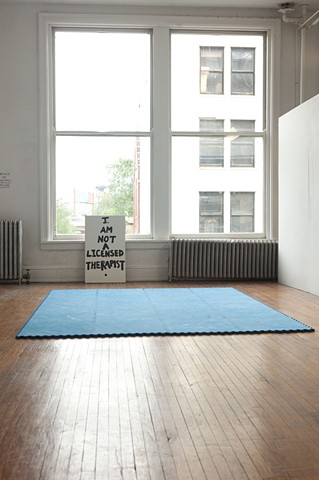 I began Fight Therapy in graduate school after returning to the U.S. as a way of recreating some of those unpredictable moments. It involves teaching Brazilian Jiu-Jitsu and Mixed Martial Arts to sometimes unlikely participants as a method of exploring psychological and physical relationships with themselves and others. Both humor and discomfort come into play as the absurdity of some of the moves breaks down walls of composure. The awkward and uncomfortable moments can be valuable in understandings one’s physical role in the relationship being explored.

Between 2006 to now, over 150 fight sessions have taken place in various locations around the US and abroad - my grappling mats travel with me. I conduct both public and private sessions.

WEDLOCK, Ep 2: Fighting (2017) Fight Therapy was featured on this podcast by married comedians Kurt Braunohler and Lauren Cook. The session starts at -13:50 after the interview with a hostage negotiator.

Arts vs. Craft (2008) was a collaborative project with artist Andrew Tosiello (Art) and action weaver Travis Meinolf (Craft). Andrew and Travis trained with me for an intense two months before having a un-choreographed match at California College of the Arts for all to see. See photos here

Art vs Artist (2007) was one of the earliest Fight Therapy collaborations with Jen Rhoads who had embarked in a rather intense psychological grapple with her art. She began training with me as a way to engage her work in a physical dialogue. After several training sessions and many discussions later, post-media artist Torreya Cummings stepped into the role of 'Art'. The training culminated into a very tough three-round match in the Social Practice Space at the California College of the Arts. Listen to Jen discuss her decision to grapple with art here ***Also see the Documentary about Fight Therapy created by Killer Banchee Studios.