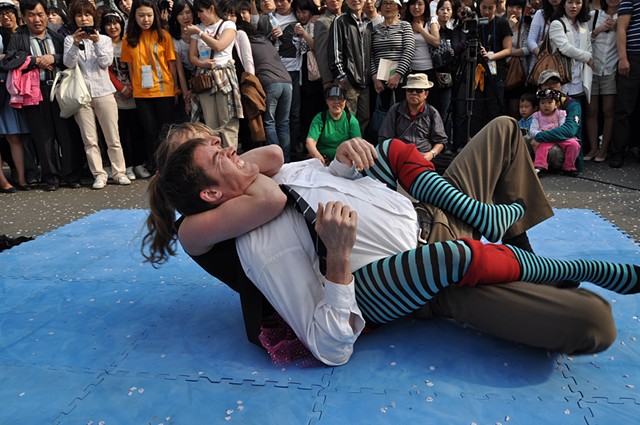 Melissa Wyman is an interdisciplinary artist who investigates interpersonal exchanges and alternative means of negotiation. Her work is often participatory and incorporates performance, video, installation, drawing, painting, martial arts, and social practice. She is an instigator, organizer, and the founder of Collaborative Combative Drawing, Rolling For The People, Roar Workshop and the Four Elements Art Series. She occasionally makes objects.

She received an MFA from the California College of the Arts in San Francisco, where she was a recipient of the Barclay Simpson Award, and a BA from the University of California, Santa Cruz. After spending many years overseas, she now lives and works in the San Francisco Bay Area and in the Manawatu region of Aotearoa (New Zealand). *Photo above - 'Spring Play', VIAF Performance Festival hosted by Arts Sans Frontiers, Seoul, South Korea, 2009. Photo by Ryan McLay